Many people think that adult coloring simply provides an opportunity for escapism and a bit of fun. In reality however it is much more than that and it brings with it considerable emotional, intellectual and mental health benefits. Here we look at 7 significant benefits to be derived from adult coloring. 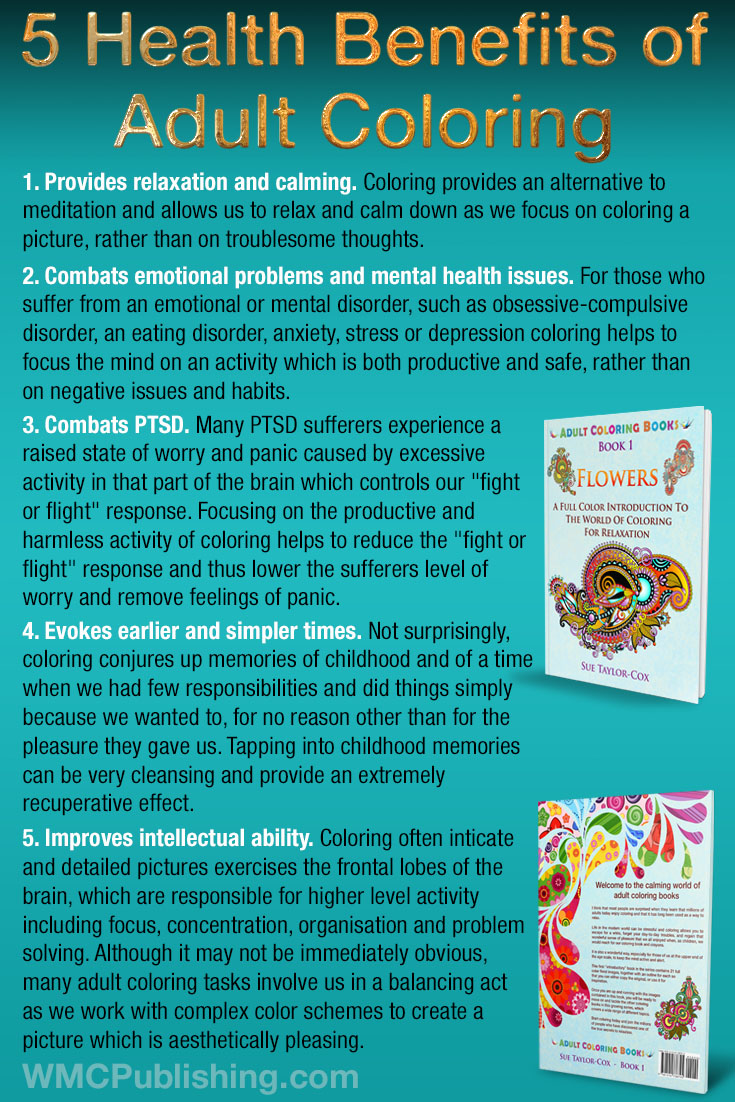 1. Provides relaxation and calming. More than one hundred years ago the Swiss psychiatrist, psychoanalyst and founder of analytical psychology, Carl Jung, recognized the benefits of coloring as an alternative to meditation. He noticed that his patients relaxed and calmed down as they focused their attention on coloring a picture, rather than on troublesome thoughts.

2. Combats several emotional problems and mental health issues. An increasing number of people today suffer from an emotional or mental disorder such as obsessive-compulsive disorder, eating disorders, anxiety, stress, depression and much more. In all of these cases there is a focus on negative issues and, in many cases, on negative habits. Coloring helps to deflect negative thoughts and focus them on an activity which is both productive and safe.

3. Combats PTSD. A common problem with PTSD is a raised state of vigilance, worry and panic caused by excessive activity in that part of the brain which controls our “fight or flight” response. Focusing attention on the productive and harmless activity of coloring helps to reduce the “fight or flight” response and thus lower the sufferers level of worry and remove feelings of panic.

4. Evokes earlier and simpler times. Not surprisingly, coloring conjures up memories of childhood and of a time when we had few responsibilities and did things simply because we wanted to, for no reason other than for the pleasure they gave us. Tapping into childhood memories can be very cleansing and provide an extremely recuperative effect.

5. Improves intellectual ability. Coloring often intricate and detailed pictures exercises the frontal lobes of the brain, which are responsible for higher level activity including focus, concentration, organisation and problem solving. Although it may not be immediately obvious, many adult coloring tasks involve us in a balancing act as we work with complex color schemes to create a picture which is aesthetically pleasing.

While many people believe that adult coloring books are nothing more than a recent fad, which will probably fade with time, the reality is that they have been around for many years and are undoubtedly here to stay.

Yes, they are fun and a great way to pass a few hours, but they are also hugely beneficial to us in a whole host of ways which might never occur to us. So, if you have not yet tried adult coloring now would be an excellent time to give it a go. You might just surprise yourself.