There are literally hundreds of strange, interesting and fun facts about the animal kingdom, and here are just seven that I particularly like: 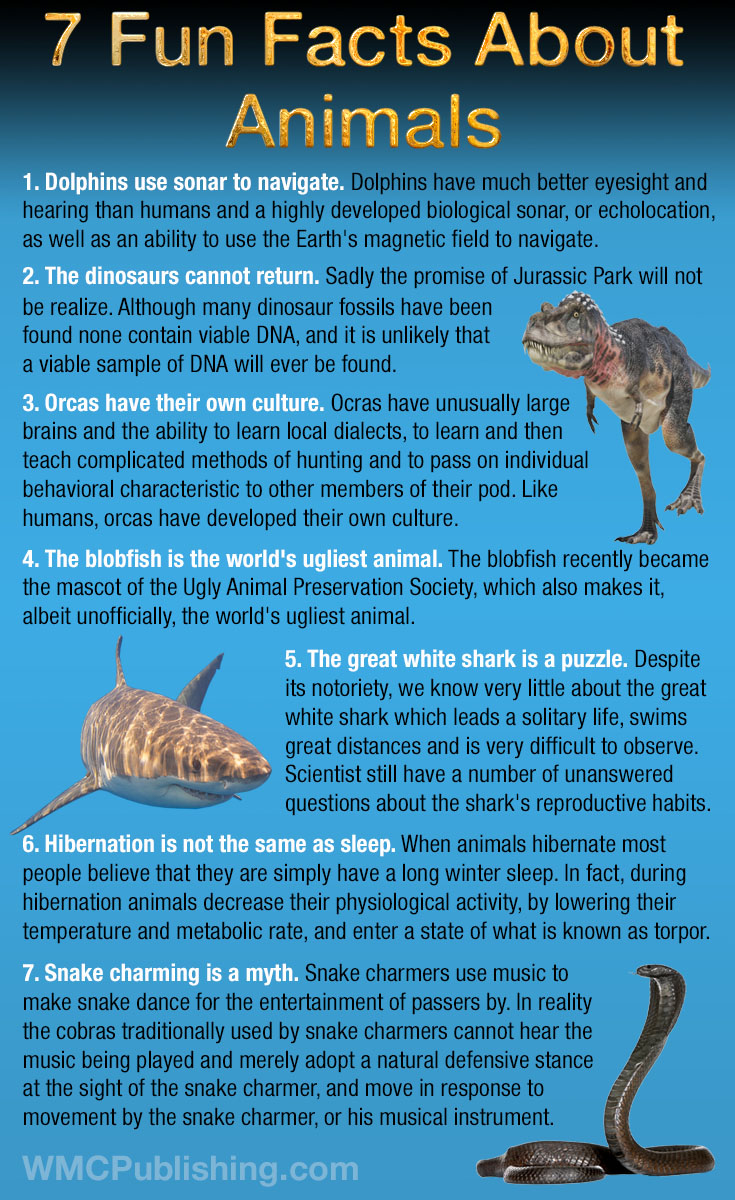 1. Dolphins use sonar to navigate. Dolphins have much better eyesight and hearing than humans and also have a highly developed biological sonar, or echolocation, as well as an ability to use the Earth’s magnetic field to navigate.

2. The dinosaurs cannot return. Sadly for many the promise of Jurassic Park will not be realized in our lifetime. Although many dinosaur fossils have been found none contain viable DNA, and it is extremely unlikely that a viable sample of DNA will ever be found.

3. Orcas have their own culture. Ocras have an unusually large brain and the ability to learn local dialects (each pod of orca whales has its own unique language), to learn and then teach complicated methods of hunting and to pass on individual behavioral characteristic to other members of their pod. Like humans, orcas have developed their own culture.

5. The great white shark remains a puzzle. Despite its notoriety, we know very little about the great white shark which leads a solitary life, swims great distances and is very difficult to observe. For example, scientist still have a number of unanswered questions about the shark’s reproductive habits.

6. Hibernation is not the same as sleep. When animals, such as bears, hibernate most people believe that they are simply have a long winter sleep. In fact, during hibernation animals decrease their physiological activity, by lowering their temperature and metabolic rate, and enter a state of what is known as torpor.

7. Snake charming is a myth. Famous throughout India, snake charmers use music to make snake dance for the entertainment of passers by. In reality the cobras traditionally used by snake charmers cannot hear the music being played and merely adopt a natural defensive stance at the sight of the snake charmer, and move in response to movement by the snake charmer, or his musical instrument.

These are just some of the many interesting and fun facts discovered by Ann Lawrence when she drew a upon a lifetime of experience to write The Animals Kids’ Books Series.