Titanosaurs were the dominant herbivores of their time and, according to fossil evidence, they replaced dinosaurs like the diplodocids and brachiosaurids that dies out during the late Jurassic and mid-Cretaceous periods. As expected fossilized dung reveals a broad plant diet, including many expected species such as cycads and conifers. Somewhat unexpectedly however theie diet also appears to have included palms and grasses, as well as plants which were the ancestors of what we now know as bamboo and rice.

Evidence of titanosaurs has been found on all continents, including a fairly recent discovery in Antarctica. Some of the best preserved titanosaur remains were found in Italy, and fossils have also be unearthed in Queensland, Australia and in New Zealand. The oldest remains were discovered in the Valley of the Dinosaurs in Brazil, while the biggest footprint ever seen was found in the Gobi desert.

It is also interesting to note that titanosaur nests have been found in Patagonia and Spain. These discoveries, which show that females dug nesting holes with their back feet and laid an average of 25 eggs, concealed their nests with dirt and with vegetation. Among the finds were several small eggs of approximately 12 cm in diameter, containing fossilized embryos.

As a group, titanosaurs included the largest land animals that have ever existed on earth, reaching up to 37 m in length and weighing up to 69 tonnes. 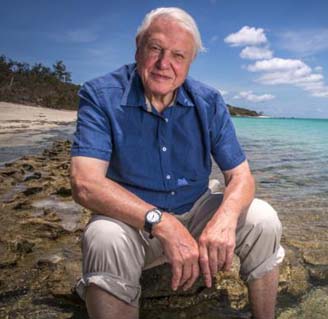 One of the world’s best known naturalists is the British broadcaster David Attenborough. The director of programming for the BBC during the 1960s and 1970s, he is perhaps best known for the nine natural history documentaries he presented for the BBC Natural History Unit. His career has truly spanned the television age, and he is the only individual to have won television awards in the categories black and white, color, HD, 3D and 4K.

It was perhaps no surprise therefore that it was David Attenborough who unveiled the world’s biggest dinosaur on the BBC in 2016.

During the broadcast the size of the titanosaurs was graphically demonstrated when Attenborough stood beside, and was dwarfed by, a replica titanosaur femur from a fossil found in Argentina by a pategonian shepherd.

For full details of this find please see this article by Patrick Foster.