Sea Turtles is the first book in the The Animal Kids’ Books Series, featuring amazing pictures and animal facts everyone should know. 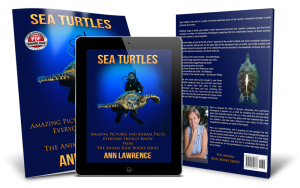 The Kindle version of the book is currently being offered FREE on Amazon!

Sea Turtles is the first in a series of books exploring the animal kingdom using both words and amazing pictures of animals.

Animals come in all shapes and sizes and include mammals, birds, fish, reptiles and amphibians. And, whether we are talking about wild animals or their more familiar domestic counterparts, we are talking about a fascinating world that you can spend a lifetime exploring, and only scratch the surface.

Sea Turtles – Amazing Pictures and Animal Facts Everyone Should Know looks at what many people consider to be weird sea creatures. It would however perhaps be more accurate to describe them as prehistoric sea creatures, because they represent some of the oldest living creatures known today. The relatively small number of endangered sea turtles that share this planet with us today are the most amazing animals, and this text and animal pictures book contains a wealth of amazing animal facts.

With an ancestry dating back to the early days of the dinosaurs here on earth, the book looks at the life of 7 of the world’s oldest and most incredible creatures:

After a lifetime spent studying the animal kingdom at first hand as she has traveled the globe, Ann Lawrence brings the world of these marine creatures to life with some of the most amazing pictures you will find anywhere.