Snakes is the second book in the The Animal Kids’ Books Series, featuring amazing pictures and animal facts everyone should know. 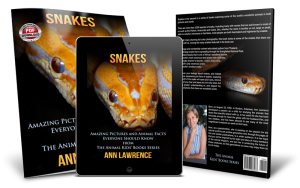 Snakes is the second in a series of books exploring the animal kingdom using both words and amazing pictures of animals.

Snakes – Amazing Pictures and Animal Facts Everyone Should Know looks at snakes from around the world. This “all about snakes” animal facts book contains details of many of the world’s scary venonous snakes, as well as several snakes that people keep as pets. From the snakes of Florida and Texas, to those of India and Thailand, this book is filled with some truly amazing animal pictures. From corn snakes, king snakes and water snakes to vipers, cobras and black mambas, whether harmless or poisonous, this book is filled with facts about snakes.

With an ancestry dating back over 100 million years, the book looks at many of the world’s oldest and most fascinating reptiles:

After a lifetime spent studying the animal kingdom at first hand as she has traveled the globe, Ann Lawrence brings the world of these ancient reptiles to life with some of the most amazing pictures you will find anywhere.