View cart “Sharks (PDF)” has been added to your cart.

Whales is the fourth book in the The Animal Kids’ Books Series, featuring amazing pictures and animal facts everyone should know. 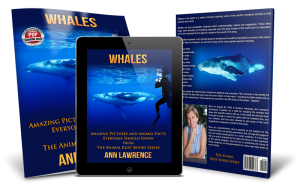 Whales is the fourth in a series of books exploring the animal kingdom using both words and amazing pictures of animals.

Whales – Amazing Pictures and Animal Facts Everyone Should Know looks at the whales that roam the great oceans of the world. This “all about whales” animal facts book contains details of many of the world’s oldest and most watched creatures. Whales have caught our imaginations for many years now and it is wholly understandable that they should be at the center of many stories, including such favorites and the biblical story of “Jonah and the Whale” and the children’s classic “Moby Dick”.

Descended from a family of land mammals, the ancestors of today’s whales took to the sea some 49 million years and this book shows what these fascinating animals look like today. The whales appearing in the book include:

After a lifetime spent studying the animal kingdom at first hand as she has traveled the globe, Ann Lawrence brings the world of these giants of the oceans to life with some of the most amazing pictures you will find anywhere.