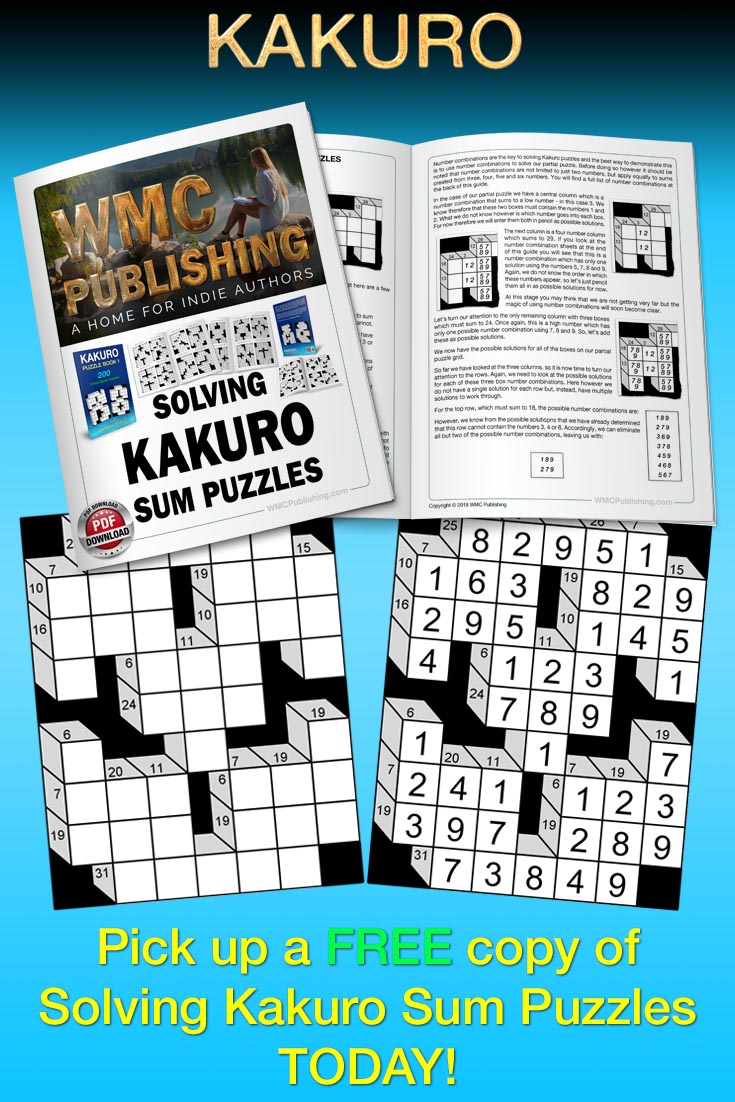 The history of the kakuro puzzle is similar to that of the sudoku puzzle in the sense that, despite its name, it did not originate in Japan. The kakuro puzzle that we are familiar with today was invented by Jacob E. Funk, a Canadian employee of Dell Magazines, in 1966. The puzzle was originally named “cross sums”, although many people used the name “cross addition”.

In 1980 the president of Nikoli Puzzles, Maki Kaji, brought this puzzle form to Japan where it was re-named “kasan kurosu” (meaning addition cross). Then, in 1986, Nikoli Puzzles adopted the name “kakuro”, which was the common abbreviation used by Japanese players of the game. Between 1986 and 1992 kakuro was Nikoli Puzzles best selling puzzle and dropped into second place below sudoku in 1993. Today kakuro puzzles appear in more than 100 Japanese magazines.

Like sudoku, the popularity of kakuro soon spread to the West and in 2005 two UK newspapers, The Guardian and The Daily Mail, started running daily kakuro puzzles. From here the craze spread quickly and today kakuro puzzles are regularly published in a large number of countries around the globe.

As with most puzzles today, kakuro has evolved over the years and there are now several variations of the puzzle form. The original version however consisted of a 16 x 16 grid of white squares with a row of black squares running along the top and down the left-hand side of the puzzle grid. Black cells were also added by the puzzle designer within the main white square grid to break the puzzle grid up, in a fashion similar to that seen in crossword puzzles. The black cells were divided into two triangles by a diagonal line running for the top left corner to the bottom right corner of each cell. Numbers could then be entered into the upper and/or lower triangle. Following the terminology used in crossword puzzles, these numbers were called “clues” with a number in a lower triangle being a clue for the vertical row of cells under the triangle. Similarly, a number in an upper triangle was a clue for the horizontal row of cells to the right of the triangle. Today this principle still holds true, although many puzzles are now designed in a 3D format.

There are various techniques that can be used to solve kakuro puzzles but, underlying all of these, are what are known as “magic blocks” or “combinations”. Put simply, these are situations within a puzzle where, regardless of the puzzle design, only a single solution is possible for a particular row. For example, if you have a row of 2 cells and the clue number is 4, then the only two numbers that can be entered are 1 and 3. You will need to use logic to decide which number goes in which grid square, but at least you know that these are the only numbers that can be used in the solution. This may seem a little simple, but for larger numbers and longer rows, narrowing down the numbers which can be used can be extremely helpful. For example, for a row of 4 grid squares and a clue of 29 it can save a lot of time if you start by knowing that the only numbers that can appear in the solution are 5, 7, 8 and 9.